Pay it forward is a way of life for startup entrepreneurs Meiju Vartiainen and Harry van der Veen. “Be generous and get generosity back”.

Life as a startup entrepreneur is in many ways a marvelous experience and journey, but it also has is hours of hard work and miles to cover on a long and twisting road. This is when you need persons who can inspire and support you. And being the one sharing experiences is, and feels, just as important.

Maybe this why the pay-it-forward culture has become so powerful in the startup community. If you want to move forward, you have to have help from others, you can’t do it on your own. Startup entrepreneurs Meiju Vartiainen and Harry van der Veen have realized, and lives, this philosophy.

– When it comes to sharing, a lot is happening in the startup community. Business incubators, entrepreneurs, mentors, and business developers, they all want to be there to support. Facebook groups, events and networks are formed, for people to share knowledge and experiences. This is absolutely amazing! Exclaims Meiju Vartiainen, startup entrepreneur from Umeå.

A solid sounding board

Meiju has had Skellefteå entrepreneur and Nuiteq’s CEO Harry van der Veen as a mentor and sounding board. Having read his posts on social media about running a business, she got in contact with him via LinkedIn asking for more advice. Giving it was a no-brainer for Harry, but it took more than a year before they had time for a coffee in real life.

– So many people gave me advice and support when I stared Nuiteq. If I have knowledge that can help someone else, I happy to share it with them, says Harry van der Veen as they meet for coffee at Nuiteq’s office in Skellefteå.

– As an entrepreneur you will make plenty mistakes as you go along. If you, with the help from others, can avoid some of these mistakes it saves both time and money, he continues.

Giving gives you more than taking

For Meiju and Harry the pay it forward culture in the startup community is about sharing experiences and time. Being there to support someone without thinking of what you gain from it.

– Karma comes back. If you are generous you get generosity back. Giving gives you more than taking, says Harry van der Veen.

Both Meiju and Harry have had help from Uminova over the years. For instance, Meiju Vartiainen is a former Uminova Innovation’s Startup Program participant. While Harry van der Veen has had support when his company wanted to grow internationally. 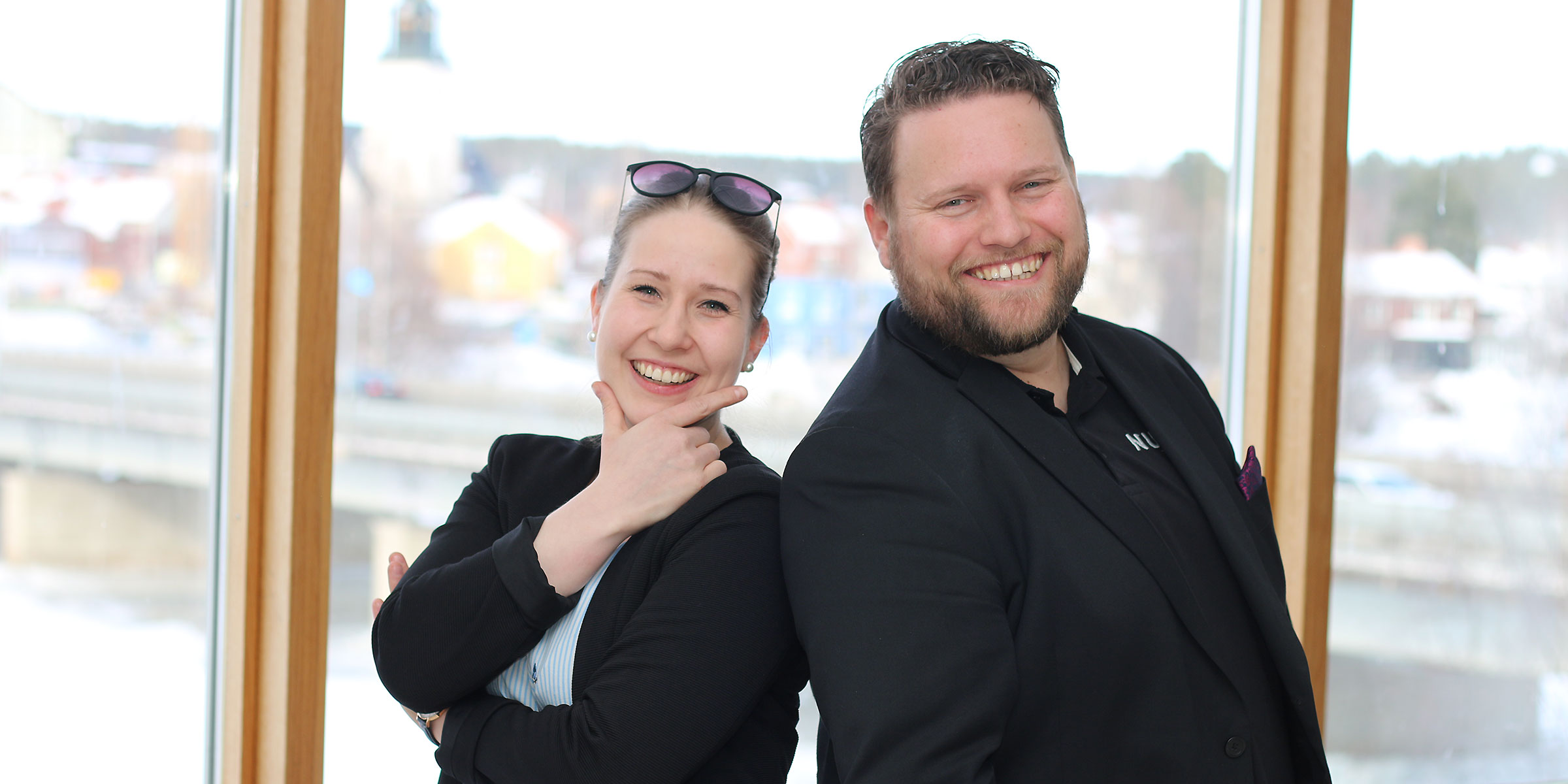 For Meiju Vartiainen and Harry van der Veen, the pay it forward-culture in the startup world is about sharing their experiences and their time.

Being a startup entrepreneur is intensive and Meiju Vartiainen’s days are busy. She and her team is starting their new company Mowida, a company that will change the housing market by connecting tenants with landlords. A bit like dating, but for the housing market.

Harry van der Veen is a Skellefteå startup veteran. His company Nuiteq developed the pedagogic tool Snowflake, for multitouch screens and smart digital boards, now used in more than 70 countries all over the world.

Harrys know-how from building a company is a goldmine, explains Meiju Vartiainen. As a startup entrepreneur setting out she is eager to discuss ideas and hear how, and what, others did. So, when she had an idea about a YouTube series on her life as a young startup entrepreneur, she wrote Harry to hear what he thought of it.

– And you replied “Just do it!”. I don’t think I would have dared if you hadn’t been so encouraging and supportive, she continues looking at Harry.

Other topics that Harry has discussed with Meiju incudes investments and funding for the company.

– You have to keep track on so many things when it comes to financing, and you can easily get lost, says Harry van der Veen.

– It was definitely something that I needed advice on. We recently received financing explains Meiju Vartiainen. I asked Harry for help and during a period we wrote to each other so frequently I actually started wondering where he gets the time, he has a job that needs to get done as well.

– I am happy to be able to help. Investments are really important so helping each other out is a good thing, says Harry van der Veen

– You and I are similar in that we like giving back to others. You have done some great things already and your approach and attitude is important. Being able, and willing, to give to others without expecting something in return, continues Harry.

In more than one way the pay it forward culture is part of what Meiju and Harry does, inside and outside work. The network Brudarskap is important for Meiju, a network she and a group of women started, many of which are former Uminova Innovation’s Startup Program participants.

So much goes on in Brudarskap. We meet once a week to have lunch and one can easily see how we all inspire and help one another. Many take new steps in their careers, some feel better and others have found the courage to change jobs, Meiju tells us.

Meiju also believe in sharing in other aspects of her life. In everything she does she wants to inspire and get inspiration back.

Not long ago she raised 75 000 SEK for charity by riding 3 100 kilometers on her bike and, as of this year, she also meets elderly working as a volunteer.

For the last couple of weeks I have meet a 97 year old man who lives at a nursing home where most of the residents have dementia. He is a genuinely nice and wise man that wants to have someone to talk to. So, now I visit him once per week to make him feel less alone.

– At least once every year I watch the movie Pay It Forward. It is about a ten year old boy who, as a school assignment, gets the task to come up with an idea that can change the world. He decides to help three persons in doing something that they cannot do themselves, and in turn they should help three others. I watch that movie to remind myself of what kind of person I want to be, says Meiju Vartiainen.

In Skellefteå Harry van der Veen supports several young companies and entrepreneurs as an advisor and mentor. During 2015 Harry received the award Best Pay it Forward Attitude as a participant in the Silicon Valley Tech Incubator Program, TINK.

He is also very particular and determined that his own company, Nuiteq, sponsors and contributes to charity. The Swedish Childhood Cancer Foundation, the Red Cross, and the diabetes association have all received contributions and Nuiteq also sponsor the Swedish championship (SM) in winter swimming, the gaming festival Nordsken, and the creative conference Creative Summit, among others.

Also, all employees get one day per month of payed leave to do something charitable.

– One example is how our employees in India, who have worked with stray dogs, Harry van der Veen says.

As Meiju and Harry continue meeting, in real life and online, they are sure to continue sharing ideas and thoughts. Pay it forward has become a way of life for both.

More news about NUITEQ and Mowida

Nuiteq has appointed Felicia Ignberg as its Video Editor as the need for video is increasing.

Nuiteq from Skellefteå, has announced that it has raised its third round of venture capital funding.